The Wolf in Banja Luka

A Balkan in ruins after the civil war and the Serbs’ attempt at conquering Kosovo constitute the framework of the latest book about the CIA agent Jan Jordi Kazanski. If he is to find his lost girlfriend, he must first track down the mighty shadow figure, Kurjak - the Wolf.

When CIA agent Jan Jordi Kazanski’s girlfriend Ewa disappears without trace in the Balkans, Kazanski comes under pressure from the International Criminal Court in the Hague to take over her mission. He has to track down a  mythical figure from the Serbian underworld by the name of Kurjak - the Wolf - and force him to witness in court.

Unaware of the games of high politics going on behind his back, Kazanski begins a dramatic manhunt which takes him through the war-torn areas of Croatia, Kosovo and Bosnia-Herzegovina.

With a taciturn old Serb and a mysterious Croatian woman as travel companions and unknown pursuers on his heels, Kazanski has to proceed with caution if he is to have any hope of completing his mission and find Ewa alive. On the Wolf’s territory a wrong move can be fatal.

The Wolf in Banja Luka is Jensens third and last international thriller with the CIA agent Jan Jordi Kazanski as main character. 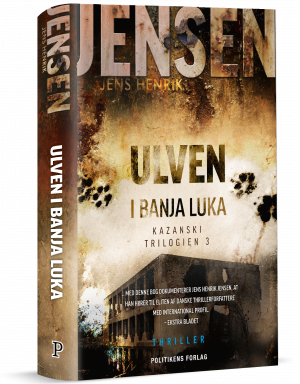