Everyone believes that Niels Oxen is dead. Instead, he prepares for the final showdown with the forces of darkness together with Franck and Mossman. A Swedish castle from the Middle Ages becomes a dramatic backdrop for Oxen’s fight to regain his life.

The Danish war veteran Niels Oxen is thought to have died during an accident at sea. In reality, he has overcome severe injuries on a little island in the Swedish archipelago and is now faced with the worst dilemma of his life:

if the leaders of the secret powerful network Danehof realise that their assassination plot against him failed, they will start a real manhunt to kill him;
if the Danish police realise that he is alive, he will be hunted and accused of a murder that he did not commit.

Nevertheless, Oxen decides to try to unveil the guilty parties. If he does not, he will be doomed to permanent flight – without the chance to see his son again.

Faced with an impossible task, he contacts his previous partner from PET [police intelligence service], Margarethe Franck, who in the meantime has been fired and is working as a till assistant and hotel dishwasher. Oxen and Franck again team up with the former PET chief, Axel Mossman, and his nephew.

The fight against Danehof has had catastrophic consequences for all of them, and they can only get their lives back by defeating the dark men. But how does one fight an invisible enemy?

The Frozen Flames is a sequel to the first two volumes in the series featuring Niels Oxen, Hangdogs and The Dark Men. Together the first three volumes form The Danehof Trilogy. 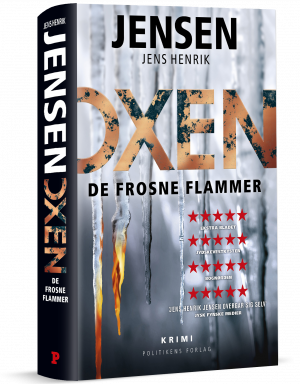