Niels Oxen hides at a remote fish farm where he works. He has surrounded himself with surveillance cameras, as he fears for his life. One night, the enemy emerges from the forest.

Niels Oxen, the highest decorated soldier to ever serve in the Danish army, is living and working at a remote fish farm in Jutland under a Romanian identity.

In this secluded place, the veteran is battling his inner demons whilst living in a constant state of alertness - harbouring a secret which is keeping him alive, but may ultimately kill him.

When a curator is murdered at a castle and the Danish Minister for Justice is involved, a flood of serious events is unleashed.

Only a few people sense a connection to Oxen. One of them is his old partner from the Danish Security and Intelligence Service, Margrethe Franck, who has been searching for him for over a year. When she finally tracks him down, she seals his fate as well as her own.

Suddenly, Oxen is the target of a manhunt. Some wish to help him. Others wish to kill him. Who is friend and who is foe?

Once more Franck and Oxen join forces against the dark men in power, for a hunted veteran has but two options: perish or fight back.

The Dark Men is the sequel to Hangdogs, the first novel in the Oxen series. 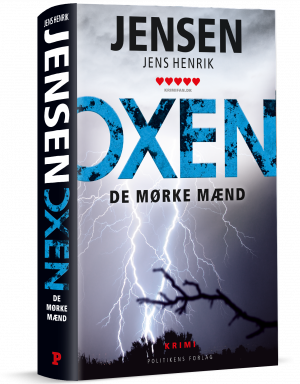